Gone are the days when this exact moment was shared only between you and those directly around you, not broadcast to friends far and wide on Instagram. Gone are the days of journeying into a new land and having only a hand written letter of introduction (and maybe an advanced telegram) to take you on your journey.

We find ourselves spearheading this social revolution and becoming champions of this new frontier, reorganizing social and society in an entirely new way that has the possibility of connecting the world through infinite little wires once and for all where we are able to gain so much more insight into each others lives to allows us to connect, understand, and share in a more direct way we’ve never been able to before.

In fact, the basis of empathy – identifying and understanding another’s situation or feelings – is entirely rooted in this, to wear somebody else’s shoes for a day.

Understanding this, I have two immediate questions. The first is how much then do we share in our new social society? Do we allow ourselves to be a social innovator, pushing the comfort zones and the boundaries many have erected before us?

And if we do, does this make us more social? It’s easy to see how sharing like this could quickly transition into being used as a soapbox, rather than hypertextual wires; lifelines.

It’s up to you if and how you respond. It’s also up to you how you choose to use this new tool.

I have recently had the pleasure of seeing a certain Rihanna x Damien Hirst x Mariano Vivanco image created for the 25th Anniversary of GQ magazine. 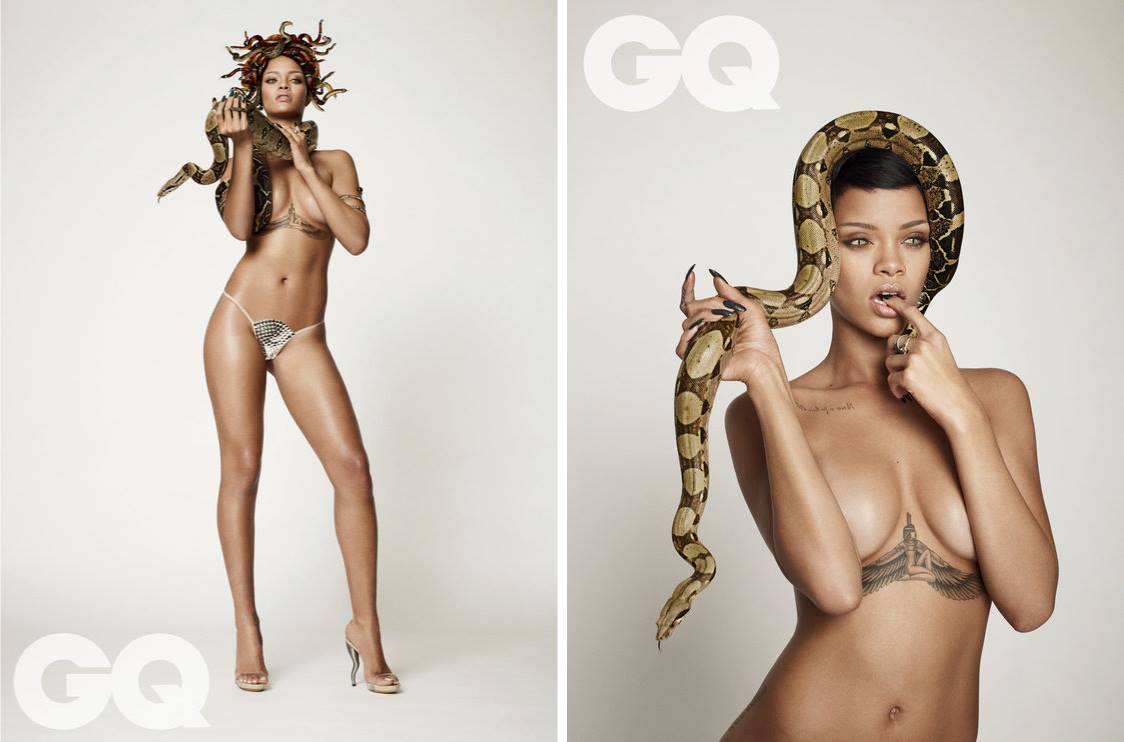 There it is, that’s it. That’s the piece that’s led to my thoughts.

What we see is a singer holding a snake like it’s a carnal play-thing. The singer [Rihanna] is wearing heels and a very tiny thong, nothing else.

What does this represent, and should we [& Rihanna] be concerned about this.

To shift my thoughts to general, rather than specifically directed towards this photograph, I want to think about how society in general holds pop-icons as more than just icons.

What we now have is an introspective view into these stars lives, a 24 hr hotline for all things [insert celebrity of the hour here]. But what is the meaning of this? Do I necessarily want to know about Rihannas private life, or do I just want to know when her next single is coming out? Do I want to know about Miley Cyrus doing semi-nude photographs with Terry Richardson, or do I want to hear how her vocal chord transitions from the lows to the highs?

But how is an icon an icon without having an image? They go hand in hand. Of course there are thousands – perhaps even millions – of people out there in the world that can sing like Miley or Rihanna, but they don’t have the image built up to put them onto that pedestal. They also don’t have the millions of backing, but that’s another can of worms.

So, we know image is important for pop stars. Frankly, image is important no matter what we are doing in life, this is why we wear ties to our interviews, and keep the fork on the left hand side of the plate. So what are the pop stars thinking about when they do nude-ish photographs like this? Is this for their own presentation of their image? For their fueling the scandal? For getting headlines? For keeping men tight in their pants?

Image is different than self. Authentic people try and align these two as closely as possible, but frequently there is a gap. People like Britney Spears, Rihanna, or MJ have become doubly famous for a bridge being built between this gap to reveal a not-so-pretty personal life.

So what is it? What does it mean?

Image is different than self. An image of a woman doesn’t tell you who she is. It shows you what her make-up-artist, photographer, re-toucher, wardrobe, and stylist have decided to show you, but it hardly goes much deeper. Sure some lifestyle photography can get close to true representation. Most photographs try to portray some type of image though, which any good art should try and do. Buying into this image is what sells. It sells Rihannas albums, it sells GQ & Bizarre Magazine, it sells tickets to Miley’s concerts [and probably her Hannah Montana products].

I keep thinking about some of the greatest stars who have been so stuck in their image that they can’t get out. Jimi Hendrix was working on breaking out of his image, as he began to feel people just came to see him play his guitar with his teeth. Snoop Doggy Dog has shifted to Snoop Dog, and then into Snoop Lion, and perhaps now just Snoop? It’s important for these stars to identify the fact that image is different than self, and that image is a tool they’re using to increase the love-ability of their product. Further, it is utterly important to realize that if it’s not working to change it. Scrap it, cut it up, delete it. Re-work. As Snoop has done fairly successfully.

Image is different than self. Bridges for this gap are necessary for authenticity but potentially very hazardous to sanity if image isn’t carefully crafted in the beginning. Image can become a horrible perpetual trap that can leave a star so stifled the whole point of an image becomes moot and useless.

Pick images wisely. Superstars don’t need to be naked. Coco Rocha doesn’t shoot nude, or any sort of implied [she makes photographers sign a contract with her that says so], yet she’s one of the most successful models out there today. Today, in a world where nudity seems to be as casual as an afternoon coffee.

There is an avenue for everybody, for all desires and fancies. If you want to craft your image in a thong, than flout that thong like it’s made of pure gold. If you want to pick an avenue that has skinny ties and tailored pants, then strut.

Most importantly, be aware that you do have an image and I advise you to take the necessary steps to align it with you and grow with it, otherwise you may be kissing fire to impress the faggots.

Living the life you want to live requires an alignment of heart, body, mind, and soul. A useful medium to incubate this alignment can be image, but mind the ego.